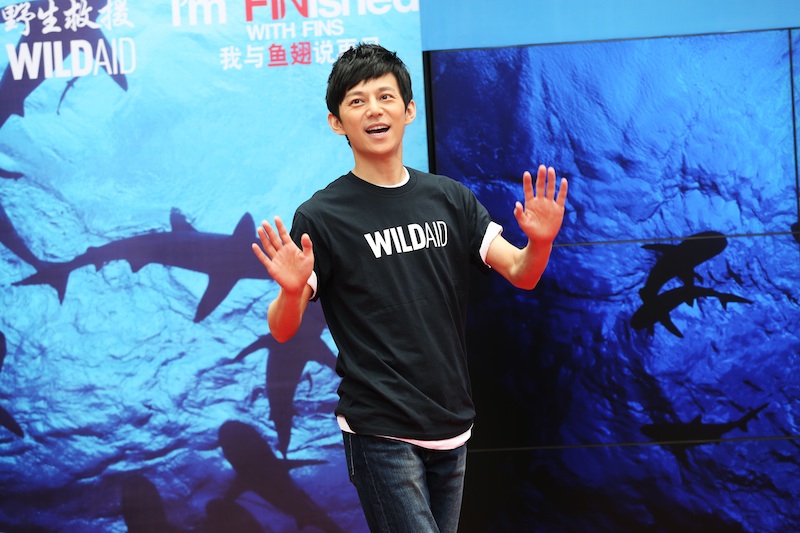 On a day traditionally celebrated with the gathering of Chinese families, WildAid launched the “I’m FINished with Fins” campaign in Mainland China during the Mid-Autumn Festival. The campaign, which launched earlier this year in Hong Kong, Singapore, Malaysia and Taiwan, aims to raise awareness of shark finning and help China’s residents pledge not to eat shark fin. The launch was showcased at Shanghai’s Touch Mall to allow hundreds of supporters and notable figures to pledge their commitment to "refuse to eat shark fin." Headlining the festivities were members of “Happy Camp”, a wildly popular television show throughout China, including He Jiong, Xie Na, Li Weijia, Wu Xin, and Du Haitao.

Following WildAid’s “When the Buying Stops, the Killing Can Too” campaign, led by Yao Ming and the Chinese government’s 2012 ban on shark fin soup at official functions, “I’m FINished with Fins” will continue to raise awareness that saying “no” to shark fin soup is socially acceptable. The campaign will be primarily promoted online through China’s burgeoning social media platforms.

According to the South China Morning Post, the Census and Statistics Department of Hong Kong reported that shark fin imports have reduced from 10,292 tons to 3,087 tons from 2011 to November 2012; over a 70% decline. Additionally, the chairman of the Hong Kong-based Shark Fin Trade Merchants Association told the South China Morning Post “the whole industry has recorded a 50% decrease of sales in the last year…mainly due to the omnipresent advocacy by green groups."

“CCTV and other Chinese media have helped to reduce demand and cut the financial incentive to kill and fin sharks. The government set a leadership role through the media and by banning shark fin at their official events, which is now being adopted by Hong Kong and we hope will be emulated throughout Asia,” said Peter Knights, WildAid’s Executive Director.

“I’m FINished with Fins” was originally launched by Shark Savers in partnership with WWF-Hong Kong, Nat Geo Wild, National Geographic, and WildAid in Singapore, Malaysia, and Taiwan. The campaign is currently seeking 100,000 Hong Kongers to pledge through an online platform not to consume shark fin soup.

For the latest updates on the “I’m FINished with Fins” China campaign, upcoming events, and other supporter activities, please visit the official campaign website at http://finished.wildaidchina.org.